When should I get rid of my child’s pacifier? 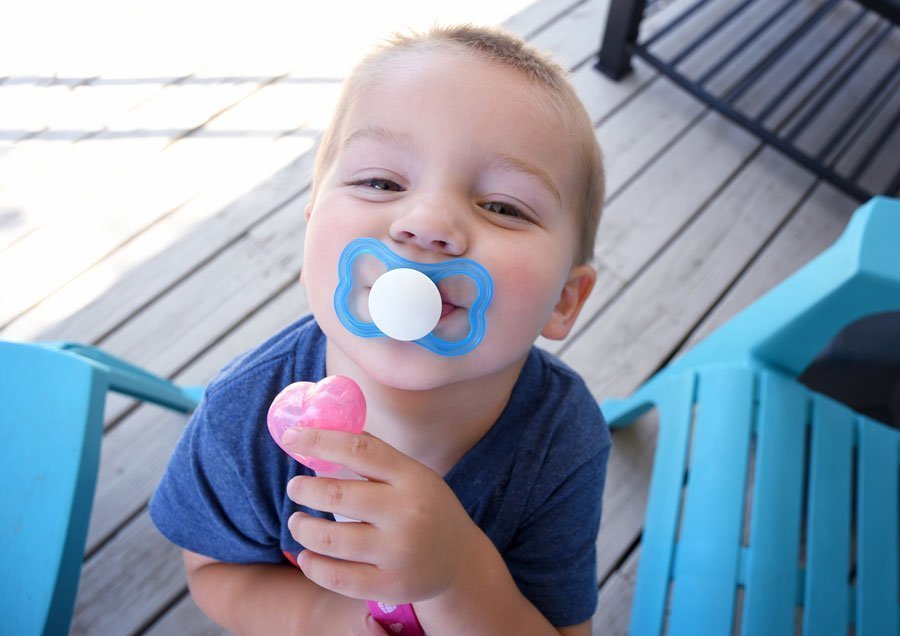 That is such a hard question. Some children really love the pacifier and some do not.

Pacifiers can be soothing for babies and toddlers as well as parents, especially in stressful situations. So, if you need it and your child is 3-years-old or younger totally do your thing. But, if your child is older than 3-years-old the pacifier starts to create problems and other parents may get a funny thought in their head about you and your child’s pacifier use.

There is a great article by The Mama Notes  A Dentist Shares How & When to Wean from a Pacifier and here are some takeaways from it:

The American Academy of Pediatrics (AAP) recommends pacifier use for up to 6 months at sleep times to help reduce the risk of SIDS, but after 1 they don’t encourage it since it has shown some correlation with middle ear infections. They recommend weaning from the pacifier during the second six months of life to prevent complications from prolonged use such as negative effects on breastfeeding, dental malocclusion, and otitis media.

From a dental standpoint, decreasing use of the pacifier after age 1 is best so as not to impede correct swallowing pattern and tongue position which guides the growth of the upper and lower jaws. Some kids can develop crossbites or an open bite as early as age 2-2.5.

So, that is all a little confusing because none of it says the same thing. So, you have to use your best judgment and every kid is a little different and parents have different parenting styles too.

Here is my take: It is best to ween off the pacifier by 6-8 months of age. After 9-months of age, it is possible for your child to form an emotional attachment to their pacifier as well as acquire all of the problems listed above.

Now, if that is just not happening for your child and you can’t ditch the pacifier by the time your child is 9-months-old then It is best to have them get rid of it before their third birthday.  Around 2-3-years-old most children are emotionally ready to ween off their pacifier. And open bites and crossbites become much more difficult to naturally fix. Before 3-years-of-age  most open bites and crossbites will fix themselves if the pacifier is weened by then. Trust me, you do not want your child’s dentition to be affected by a pacifier. It does not look pretty! Google it if you want to see it for yourself.

I have had 2 kids who have loved their pacifiers and one who did not like it, Max my 9-month-old. Pacifiers can prevent your kid from talking! Pacifiers are just in the way and prevent your articulators (tongue, teeth, jaw, etc.) from moving properly. This makes kids really difficult to understand. I would constantly be saying, “I can’t understand you with that paci in your mouth!” This was really frustrating because I am a speech therapist! So, we quickly developed the rule that pacifiers stay in the bed and they were not allowed to come out. This way, it was never a problem when trying to communicate and I didn’t have to fight with my child to give it up when we were out and about or in a class. Mason and Miles, my two oldest kids, both developed slight open bites and crossbites from using their pacis. They both gave them up by 3-years-of-age and their bites corrected themselves.

Why am I even talking about this?

What does a pacifier have to do with Speech Pathology?

The answer is EVERYTHING. Speech therapists treat articulation and feeding disorders. Prolonged pacifier use can cause speech sound disorders and a speech delay! They can also cause a reverse swallow and a tongue thrust. A tongue thrust is when the tongue protrudes between the front teeth during speech and swallowing, which is caused by an open bite.

To make the transition of getting rid of the paci easier, start to talk about the pacifier going away. Talk about what a big kid they will be when they do not use it anymore. And, you may want to throw in a gift in exchange for their paci (if you need to ;). Maybe tell them that it is time for the paci to go help another kid who needs it. Keep it positive and light!

What is Pediatric Occupational Therapy?
August 4, 2022